I recently brought the ARM edition of the book Computer Organization and Design by Patterson and Hennessy from library. Half way through the book, I thought of sharing the content of this book in a more elaborated manner by making a series of tutorials on Arm Instruction Set.
So, here’s part one of the series.

A program selected for use in comparing computer performance.SPEC(System Performance Evaluation Cooperative) is such an effort supported by a number of vendors to create standard sets of benchmarks for modern computing systems.
SPEC CPU2006 is a set of 12 integer benchmarks and 17 floating point benchmarks. Integer benchmarks may vary from a part of a C compiler to a chess program to a quantum computer simulation.
Today(2017), 3DMark, PCMark10 and VRMark are some of the most popular benchmarks.
Have a look at http://www.3dmark.com/search to compare various processors.

Make the common case fast!!
A rule stating that the performance enhancement possible with a give improvement is limited by the amount that improved feature is used.

Million Instruction Per Second  is a measurement of program execution speed based on the number of millions of instructions. MIPS is computed as the instruction count divided by the product of the execution time and 10^6. 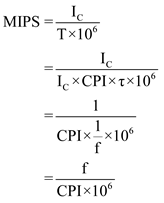 The idea that instructions and data of many types can be stored in memory as numbers, leading to stored-program computers.This sole concept enables today’s computers to run/share a wide variety of programs just by executing from the memory.

Endianness is one of the distinguishing factors which defines an architecture.
It’s based on whether LSB or MSB is stored first in the memory.
It’s generally of two types: Little Endian and Big Endian.
Little Endian: Here, numbers are stored in the following formats:
MSB………………………………………LSB
Big Endian: Here, numbers are stored in the following formats:
LSB………………………………………MSB
Most of the primitive architectures were Little Endian based(ARM was one of them), but with the latest architectures endianness is configurable.
But, How simply storing the numbers in a reciprocated format helps?
While adding two numbers, we generally move by adding LSB first then MSB.
On an architecture like Intel 8088, where size of data bus(8 bits) is not equal to size of registers(16 bits), storing in little endian format helps in decreasing operations while adding as LSB is fetched first the MSB. So in a clock cycle we can perform both fetching and arithmetic operation.
Big-endian numbers, on the other hand, can be compared faster then little endian numbers. Since there first bit(MSB) is the sign bit itself we can easily compare on basis of their signs.

Note:
Further reading: https://people.cs.umass.edu/~verts/cs32/endian.html
Note: Before moving forward I would like to clear a very basic doubt that i had when reading it for first time:

What’s the difference between ‘Registers’ and Memory?
Here, by registers I mean the registers internal to a CPU.  while by, memory i mean RAM.
ARM has 16 internal registers ranging from r0,r1………r12,SP,LR,PC.
Obviously, access to registers is faster then memory thus by using registers for common operations reduces code spill and memory traffic.
MIPS64 has 32 such General purpose registers.