Memristors, the fourth missing element after Inductance, Resistance, and capacitance, is nowadays a scorching topic of research among the electronics community. A large number of papers on its models, applications, and feasibility are now available. In this post, I’ll try to cover most of its background research:

Copyright notice:- Most of the figures presented below are taken either from google images or are publicly available under GNU/ Artistic license or are drawn by the author himself. Material presented in the following text is published under the Common Creative license.

Based on symmetry arguments, Chua proposed the existence of the fourth fundamental, passive component after Resistor, inductor, and capacitor; he named it Memristor(Memory resistor). Memristence of a device is Non-LTI and directly links electric charge and the flux.

Out of these four fundamental elements, Memristor has unique VI characteristics, which makes it suitable for the design of all sorts of Non-linear chaotic circuits.

Memristor’s electrical resistance is not constant; rather, it depends on the history of the current that previously flowed through it. And this is what makes memristor so unique! Its memory or non-volatility has many potential applications. Chua claimed that memristor’s definition could be generalized for all sorts of 2 terminal Non-volatile memory based on resistance switching effect. An example of this is ReRAM. Biological components like blood and skin also fit this definition(apart from being 2-terminal).

The polarity of a memristor and an analogy

This is exactly how memristor works. It has it’s preferred direction of current flow, which is known as it’s polarity. When charge flow is in the direction of this polarity, the resistance of the memristor decreases. And when it’s opposite resistance increases.

As presented in [8], Memristor presents few important behaviors concerning chaos theory, such as great sensitivity of circuits behavior on initial conditions, the route to chaos through the mechanism of period-doubling, as well as antimonotonicity. I’m not very sure about this interesting relationship between the two. I need to dig into this a bit deeper.

Why is such importance suddenly given to memristors and its applications? Its concept was around the late ’90s.

Due to the above mentioned technological drawbacks, Moore’s curve is now getting saturated. We are in immediate need of certain alternative technologies that can keep up to the demands of advancing human civilizations. Few such promising technologies, which will be there in the market within 10-20 years,  are 3-D CMOS circuitry and Memristor based circuits. Other evolving technologies like Quantum dots, spin-wave devices still need a lot of development.

This section mainly deals with a more elaborated overview of memristors and few kind-of-abstract topics.

A lot has changed after HP’s claim in 2008 of realizing a practical memristor. There’s a complete drift in the research community.

Most of the focus was given on Ideal characteristics or models of the Memristor.

In 2008, HP claimed to have found the practical existence of a memristor. A summary of their experiment is presented in the next paragraph (there’s a lot of elaborated material available online on HP’s model so that I won’t cover in detail)

They made a 2-terminal device, made of a layer of insulated $TiO_2$ and another layer of oxygen-deficient, conductive $TiO_2$. These two materials are divided by a barrier of width ‘w.’ When a  voltage V is applied, the produced Electric field tends to alter the barrier and thus changes the resistance. There are two possible mechanisms for this: Joules heating and Ion migration.

In a memristive device, the resistance depends on an internal state $ x \in R^{n} $, where n is the total number of possible states. A state depends on the charge/flux history of the device and not directly on the current charge or flux. Whereas a memristor has a mathematically scalar state, a system has a vector state. The number of state variables is independent of the number of terminals.

y(t) = g(x,u,t).u(t) where u(t) is an input signal, y(t) is an output signal, the vector x represents a set of n state variables describing the device, and g is a continuous function. 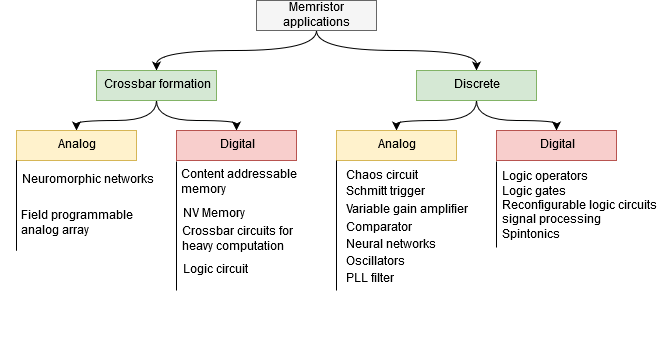 I’ll elaborate some of its important applications:

All 2 terminals NV memory devices based on resistance switching are said to be memristor-based.

They usually have faster write time, large resistance ratio (Ron/Roff), and small power consumption. It is said that with 3D memristor crossbar fabrication, we can even have 1TB of storage on a single chip. Following categorization of resistive memory, tend to replace DRAM:

There are three types of digital logic that can be implemented with memristors:

Challenges in the fabrication of Oxide-based memristor