TL;DR; MMC and SD-card have the same physical and electrical specifications but different software controls. They both are used as storage devices only. SDIO and SD-Combo cards, on the other hand, incorporate Input/Output functionality (like Bluetooth, Wifi, GPS, etc) without and with the storage facility respectively. So, an SD-Combo card can act as a wifi adapter along with a storage device.

In this blog post, I will present a summary of the following document http://www.kaltech.co.il/pdf/Eureka_sd_wp1.pdf. This is meant for anyone willing to understand how removable devices like sd cards work and the different protocols/functionalities they support.

What is a MultiMedia Card (MMC)?

MMC and Sd-card share many standard features and have the same physical and electrical specifications. The differences between the two standards are mainly on the software level commands. The similarities allow many hosts to accept both MMC and SD cards on the same socket.

In this, commands are transferred to and fro via a bidirectional CMD pin in the form of discrete packets of 48 bits. These command packets include command index, argument, and CRC bits. The command is always sent via the host and received via the sd card. Response packets are also of 48 bits. During data transfer, the basic unit of transmission is called a block, which is usually of 512 bytes and is transferred via all 4 data pins. Also, after each block transfer, 16 bit of CRC data is sent.

Note that the sd card operates in states. Each state has different sets of commands, and hosts can change state via controls. Command and data signals are synchronized via a clock signal. Initially, the host uses the 400KHz clock to communicate with the card, but it then eventually increase the clock speed during transfer for max. Efficiency. Reason: Before initialization, the host doesn’t know whether it’s an SD card or an MMC card. Now MMC card by default during initialization works in Open-drain mode(100-400KHz) while the SD card works in push-pull mode(0-25Mhz). Thus, initially, the host uses 400KHz to stay compatible with both open-drain and push-pull mode. 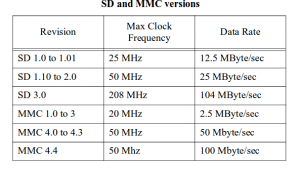 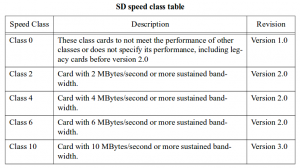 Note that the SD bus specification doesn’t define the type of memory/IO to be used with an SD card or SDIO card. So apart from NAND, one can even use any other non-volatile memory with sd card. Similarly, there’s no restriction on the type of I/O function that can be performed by the SDIO card.

It can also include DMA support. The host is responsible for providing power(3V3) to sd card a 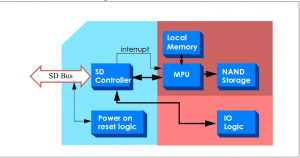 Long with the interrupt to CPU upon insertion of the SD card.

How does SPI come into the picture?

By default, the SD card doesn’t have any file system. It works on RAW blocks of data. It’s the responsibility of OS to build a file system on top of RAW space. Follow on to my next post for more details regarding working with the raw file system.